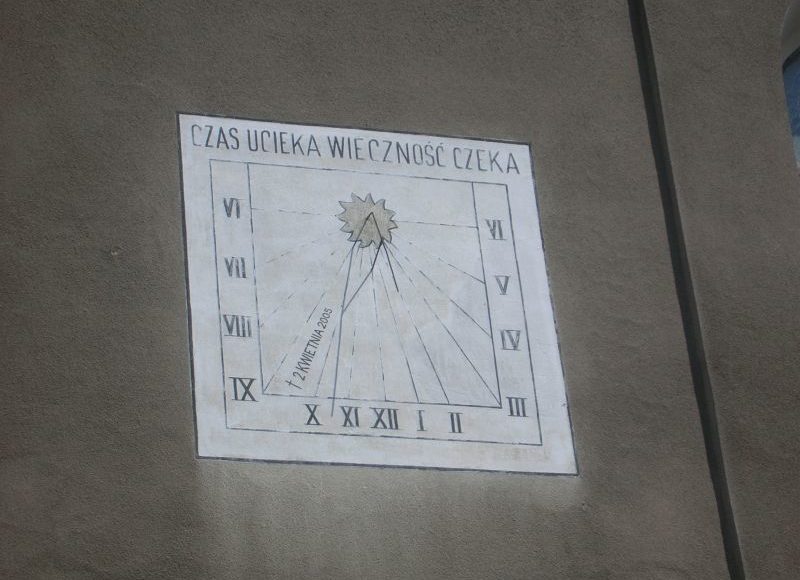 Just outside Karol Wojtyla’s childhood bedroom moves a slow and silent shadow. It is not a sinister symbol, but a sundial on the side of Wadowice’s basilica. Inscribed above the timepiece is a simple saying:

As the shadow slides in a circle around the basilica’s side a young Karol would wonder at its implication. Looking back on his life, so can we.

To spoil the suspense, the rough English translation of the inscription goes like this:

Karol spent his childhood with his father in an apartment adjacent to the church. Looking out his bedroom window the sundial looms on the side of the church directly across the alleyway. The wonderful gift of time and the fleetingness of it would follow Karol his whole life.

Man is immersed in time. We cannot escape it, or its ultimate implication: death. For Karol death was around every corner. World War II took the lives of his friends and most of his countrymen. Karol was exposed to the horrors of nazi and communist executions, the holocaust, and all the tragedies that the 20th century brought to his native Poland. All of them brought death and evil on an immense scale. These products of 20th century nihilism could easily have increased the same.  For Karol and for all Christians, however, the passage of time has another more cheerful implication. At the end of our time on earth the Lord will call us “from life to life!”, as John Paul II so beautifully put it. Karol was immersed in some of the most terrible suffering that modern humans have ever experienced. As an example for all of us, Pope John Paul II would bear witness to the blessing that is our humanity amidst the passage of time.

Time escapes. Working in a quarry during the second world war, the passage of time surely must not have escaped Karol. Immersed in back-breaking labor, the future saint was chided by coworkers for his intellectual pursuits. Studying theology and philosophy, and writing poems on his breaks, “How violently his time halted” one poem would say. Recalling the view out his bedroom window, Karol must have realized that suffering in this life is but a brief moment in anticipation of eternity.

Eternity Awaits. John Paul II’s greatest witness to the dignity of life was the completeness of his own. Integrating both suffering and joy, John Paul II provides a brilliant Christian example. John Paul II’s public transformation from youthful and full of energy to aged and suffering could have been sorrowful. Instead it was sanctifying. In his preparation for passage from “life to life”, the Pope presented a powerful witness to the dignity all humans possess. Instead of crippling disease crippling his spirits, we were shown the solemn joy of someone silently suffering. As he had known his whole life, he accepted the suffering with the absolute knowledge that time escapes, and eternity with Christ awaits. 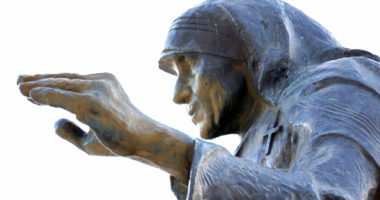